- March 22, 2017
"Don't be afraid to make mistakes, to stumble and fall because most of the time the greatest rewards come from doing the things that scare us the most...Who knows where life could take you. The road is long and in the end the journey is the destination." --Unknown from www.searchquotes.com

I gave a speech today at the Wallingford Toastmasters club. It was my fifth and for the first time I froze. Completely froze. Like a l-o-n-g silent PAUSE that seemed to go on forever...

I always seem to give the best version of my speech on the way to the meeting and today was no exception. That version was perfect. Spot-on. I hit every mark and I remembered every word. Not so while actually giving the speech.

Early in the first few lines I made a mistake. I revised my speech on the fly and in so doing I lost my way. I didn't know what came next because I had mentally deleted my cue word.

So I stopped. And stood there. I didn't have any choice because I was lost.

And then I remembered. And the rest of the speech went very well.

My evaluators were all VERY supportive and I even got props for having the courage to stand there in all that silence.

Afterward I felt sad, but not defeated. Of course I wish I had given the VERY BEST version of my speech to the club, but I did the best I could in that moment and I couldn't help thinking that maybe there was a higher purpose to be found in my mistake.

There were a lot of new members and guests in the audience today and maybe, just maybe, my l-o-n-g, l-o-n-g pause will give one of them the courage to try something that scares them. To make a mistake. To stumble and fall.

Because I did it and survived. And even thrived a little.

The text of my speech about how a TV sitcom character saved my relationship with my teenage sons is below. I hope you enjoy it.

Almost like clockwork on his thirteenth birthday my older son became sullen and withdrawn. He started spending more and more time in his room. When asked a question, he mumbled or grunted, and turned away. Worst of all, he began to recoil from my touch when I went to hug him. I had heard that this was “normal” teenage behavior, but it scared me and I didn't know what to do about it. 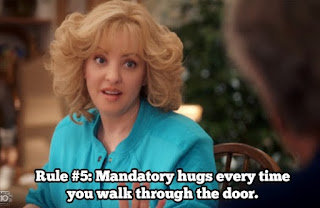 And then I met Beverly Goldberg.

For those of you who don't know her, she is a big-haired, Jazzercizin,' 1980's Super-mom who is one of the main characters on the television sitcom The Goldbergs (which can be seen on ABC Wednesday nights at 8:00pm PT) along with her long-suffering husband, Murray, and her three teenage children.
The show was recommended to me by my sister-in-law who said it was “a great family show.” So I started recording it and watching it with my sons. We loved it right away and became huge fans.

After a few weeks the boys started teasing me and saying that Beverly Goldberg reminded them of someone...I didn't see it, but I immediately recognized this as an opportunity to connect with my sons and I started watching the show more closely.

There are three primary pillars of Beverly Goldberg's parenting style: AFFECTION, NICKNAMES, and MEDDLING. I started with affection.

In The Goldberg household affection is not optional. It's even spelled out in their family rules. House Rule #5: Mandatory hugs every time you walk in the door. I decided to make this one of our “house rules” as well and everytime the boys came home from school, or left to go to a friend's house or walked within arms length of me, I reached out and grabbed them for a big bear hug. Or a nuggie or a kiss on the cheek. I called it “Beverly Goldberging” them.

My younger son, who has always loved to play chase, took to this right away. He would take off running through the house screeching at the top of his lungs trying to get away from me, screaming “NO MOM! N-O-O-O!” until I caught him and he landed on some flat surface, laughing and smiling as I Beverly Goldberged him.

My older son was less enthusiastic, but instead of pulling away with a scowl, he did it with a smile on his face, so I kept going.

In the Goldberg household all nicknames start with Schmoo and expand out from there: Schmoopy, Schmoopy Loopy, Schmoopy Poopy, Schmoop-a-loopa-ding-dong, Schmoop-du-jour, you get the drift. We had also been liberal with nicknames when our sons were small, but it was a habit we had all, seemingly, out grown and I was determined to bring it back.

I started calling my younger son Little Bear. Or Beary Bear. Or Beary Beary Bearerton. Or sometimes just Bear. We had always called my older son O, the first initial of his first name, so I just started riffing on that: O, Owie, Owie O, Owie Owie O.

Once again the reaction was more positive from my younger son, who positively glowed every time I used his nickname; my older son just smiled an embarrassed little smile, but he was smiling more often, so I kept going.

The third pillar of Beverly Goldberg's parenting is MEDDLING. There isn't an area of her kids' lives that Beverly is afraid to jump into with both feet, ususally one of them in her mouth (her kids' nickname for her is THE SMOTHER). School, sports, friends, romance, you name it Beverly is there mixing it up and – more often than not – making a mess.

As I watched the show more closely I had to admit that it was in this area that I most closely resembled Beverly Goldberg. And it wasn't pretty.

When our children are small we do everything for them – we feed them, we clothe them, we change them, we even move them around in the world – and then they grow up and we don't always know when to stop. In particular I was a meddler in the area of homework.

As soon as dinner was over I would ask: What is your homework tonight? How much of it do you have? In which classes? When is it due? Can I take a look? Have you done it yet?

It was a nightmare for them – and a nightmare for me – and it made many of our evenings most unpleasant. So I decided to stop. To take myself out of the homework game. To become the Coach and not the Team Captain, the safety net and not the straightjacket.

My husband and I decided on minimum standards of achievement, we communicated these to our sons and then we let go. After all, once they are grown up and have jobs I am not going to be going to work with them, sitting in a chair next to their desk saying, “Remember you have a meeting at noon. You should probably start that report for your boss now. Did you spell check it?” They are going to have to work it out for themselves and it seems to me that this is one of the most important things they learn in school.

It's been about two years since we started watching “The Goldbergs” and I am happy to say that my younger son, who just turned thirteen a few months ago, shows no signs of becoming sullen and withdrawn.

And my older son, now fifteen, routinely comes and sits down next to me and asks me to scratch his back or rub his head. Before going to bed each night he comes in and tucks us in, lying at the foot of our bed and telling us about his day, about what is going on in the world of sports, or showing us a funny video he saw on YouTube (only the ones that are “appropriate for parents”).

I feel like I have my son back and I owe it all to Beverly Goldberg.

- August 26, 2013
"Have you ever felt as if you just didn't want to live anymore? Everything seemed to go wrong and you felt sort of mistreated and abused. Good luck just wasn't meant for you. Well that's the time to take a walk. It is amazing what walking can do to a depressed spirit. You just walk it away so slowly, ever so slowly. You don't realize it is disappearing until finally you discover it is gone. Yes, gone, and oh, life is so wonderful." --Vera Aleith Galbreath In the mail on Friday we received a program from the memorial service for Vera Aleith Galbreath. I knew as soon as I saw the envelope what it was, and I was grateful. Grateful that someone had taken the time to let us know of Vera's passing. (Or, more likely, that Vera had arranged for this.) Vera wasn't a relative. Not really a friend. Or a neighbor exactly. But she was a presence in our lives ever since we bought our first house. It was a small house, just off of a busy street, about a mile o
Read more
- August 17, 2021

" The only way to enhance one's power in the world is by increasing one's integrity, understanding, and capacity for compassion. "    --David R. Hawkins, MD, PhD   I have been thinking a lot about INTEGRITY today because we are trying to buy a home in a super-hot real estate market and we seem to be running into a LOT of greed and not a lot of integrity. It's disheartening.    The temptation is to play "the game" along with everyone else; make promises you know you won't keep, make offers you have no intention of honoring, throw a little BS of your own onto the pile. But it just doesn't FEEL RIGHT. So we aren't. We are staying in our integrity, being honest about who we are and what we are willing to do and hoping...that our integrity attracts the right and perfect home for us.   Either way, I am finding that there is a certain power in doing the right thing, even if it doesn't yield the result you want. It's an internal power that
Read more