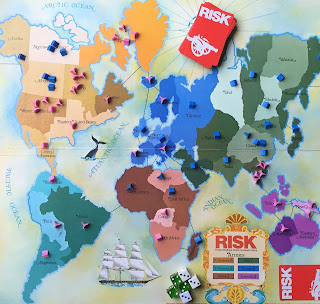 "The ego is trying to teach you how to gain the whole world and lose your soul...you do not want the world. The only thing of value in it is whatever part of it you look upon with love." --From A Course in Miracles

Our family has discovered the board game RISK lately and we have enjoyed playing it together, for the most part....

With two boys close in age board games can be a RISKy proposition. There is always the dynamic of one vs. one. Even when you add my husband or I to the mix, the boys are almost always playing against each other.

For this reason when we first started playing I felt the need to give a lecture on good sportsmanship. It lasted a few minutes longer than it needed to, well past the point of fidgeting and eye-rolling, but I felt it was important to make the point and our first game went well, with only a few minor infractions.

The next day my older son had some homework to do so my younger son and I decided to play a game mano-a-mano and that's when things got tricky.

From the beginning it looked like I had the advantage, the cards had given me control of one continent right from the start and I quickly gained control of two more. Ha, ha! I was taking over the world!

Soon, however, it became clear to me that the areas my younger son controlled (the northern territories on the RISK board) were much larger and more powerful and I began to fear for my position.

And then the dice turned on me.

I couldn't role a six - or even a four or a five - to save my life. I would go into battle with twice as many armies as my son had and come out the loser. My men were dying, my stronghold in the southern territories was slipping, and I was NOT HAPPY about it.

I started snarling at the dice, frowning at the board, and looking away from my son. In other words, being a really bad sport.

We ended the game at bedtime with the outcome still undetermined, but one thing was clear to me - I needed to get it together.

When I went to tuck my son into bed I looked him straight in the face and said, "I was being kind of a bad sport wasn't I?"

"Yeah, MOM, you were," he admitted, without hesitation.

"You were being such a bad sport!" he said, cracking up.

I was happy to end the night on a light and happy note and with the consciousness that I still needed to peel back another layer of my own bad sportsmanship, to heal myself and whatever part of me desperately needed to WIN. But I also started to think about it in a deeper way.

RISK is basically foreign relations on a small scale and it scares the shit out of me.

I was feeling insecure and uncomfortable because I was losing control of some fake countries on a game board. Is it any wonder there have been two world wars and thousands of other wars and conflicts around the globe? When this shit gets real how does anyone keep it together? How does anyone keep their finger off the trigger? How does anyone advocate for peace? Thank God for world leaders with cooler heads than mine.

And thank God for whatever part of me woke up sooner rather than later the other night because it is never worth it to gain the whole world and lose your soul - or your son.

A Course in Miracles ACIM Parenting The EGO