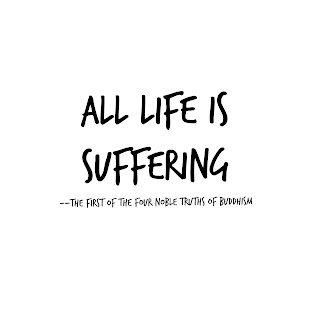 As I wrote last month before beginning the 28 Days of Abstinence challenge, I have been reading a lot about Buddhism lately. One of the concepts that has stuck with me is this idea that all life is suffering. I both love it and hate it.
I love it because it rings true to me. I read it and something in me lets go - relaxes - the way you do when truth is spoken: "Finally, someone is saying what I have always thought."

At the same time, this idea scares the crap out of me. If all life is suffering then what is the f-ing point? Not what is the point of being here - I don't think any of us knows this for sure and we each have to figure this out for ourselves - but what is the point of living? If all life is suffering, why not just let go, escape, blow this popsicle stand? (Of course Buddhists believe in reincarnation - as do I - so it really isn't a choice. One way or another, you'll be back here eventually. So it's really an "Enlightenment or BUST" kind of situation.)

So this idea that life is suffering both gives me hope and robs me of all hope at the same time, depending on my mood and state of mind at the time I am considering it I guess. Nonetheless, I am fascinated by suffering.

I am fascinated by my own suffering, particularly when it is of the "created in my own head" variety, which so much of it is. I am fascinated by people who don't seem to suffer, people who are living lives I would find unbearable and yet seem to carry a lightness, a sense of purpose and hope, wherever they go. And I am particularly fascinated  by people who suffer unimaginable horrors and yet fight to live. I don't need to tell a story here, there are thousands, chose one that horrified you and think on it awhile. Do the questions overwhelm you as they overwhelm me? WHY? HOW? WHY? WHY? WHY?

I try to feel and imagine and empathize with the suffering of others (refugees, victims of terrorist attacks and natural disasters, etc.) but I know I fail miserably. Sometimes I try to imagine that I myself am in a particular situation and I soon have to look away from the images in my own mind. I cannot bear to imagine what others have endured in real life. So what to do?

What can I do? Pray? Donate money? Try to be of service? Write about it? I do all of these and still, the suffering continues. Of course it does. That is life.

Understanding this at its deepest and most unimaginable level is what made Buddha the Buddha. And I know that if I want to become enlightened someday I must too. But sometimes it just seems like too much. Too overwhelming. Too sad. Too hard. Too much.

So the question becomes: Can absorbing the truth that "life is suffering" be the beginning of a greater understanding? Buddha goes on to unravel the mystery of life and to explain it in this way:

By death here he means not just death itself, but any kind of suffering that stems from the transitory nature of life, “'People from the beginning have erred thus,' he said, 'binding themselves in society and by the ties of love and then, as after a dream, all is dispersed.'" --From "Wake Up" by Jack Kerouac

So if I understand it correctly, it goes something like this: We suffer and die because we were born; we are born because of the things we do (presumably to hurt others or at least to keep ourselves entangled in the illusion of life); we do the things we do because of our attachment to things as we would like them to be, which comes from our desires for these things; our desire comes from our perception, which is our interpretation of something as "bad" or "good" (or perhaps "pleasant" or "unpleasant"). The thing which we are interpreting is a sensation in our body and these sensations come from our six sense organs (sight, hearing, taste, touch, smell, and mind thoughts), which come from individuality (thinking we are separate from all other people and things) and individuality comes from consciousness.

This last part stymies me a bit - consciousness is supposed to be a good thing, right? But in this case, it isn't. Somehow becoming conscious led us to recognize our separateness (our individuality), which in turn created (or led to an awareness of) our six sense organs through which we feel sensations which we then judge as good or bad and desire those things which make us feel good and then become attached to them and therefore we are born and suffer and eventually die.

This actually makes a lot of sense to me (and is very similar to the interpretation of life taught by the New Thought community of which I have been a part and not all that far removed from the story of Adam and Eve in the Garden of Eden). We were all a part of the primordial soup and then somehow (the Big Bang?) became conscious.

Once conscious, awareness of individuality arose, which somehow created the six sense organs. (I get lost at this part a little bit - how did we have six sense organs before we were born? - but perhaps there was sight, taste, hearing, touch, smell and mind thoughts before there were "bodies" as we now know them?) Through these sense organs these individual "beings" that came before us (and yet were us) began to feel sensations and to interpret them as "good" or "bad" and to desire the "good." They became attached to the "good" (and to aversion to the "bad") and this attachment led them to perform deeds which somehow led to birth (was this Adam and Eve and was the "deed" sex? One possible interpretation perhaps), which led to suffering and then death.

So how do we get out of this?

"Not by anxious use of outward means had Buddha unveiled the True Mind and ended suffering, but by resting quietly in thoughtful silence." --From "Wake Up" by Jack Kerouac


By resting quietly in thoughtful silence we may eventually - in the words of the Buddha (through Jack Kerouac) - Wake UP! If we all wake up we can end this cycle of birth and death and presumably end consciousness and return to the peace of the primordial soup where there is no suffering.

[As I read this, I am afraid it sounds a little dark and hopeless. And maybe it is to some degree, but I hope you will read it not as a hopeless rant, or an opportunity to wallow, but as an attempt to understand. That is the spirit in which it is written anyway.]