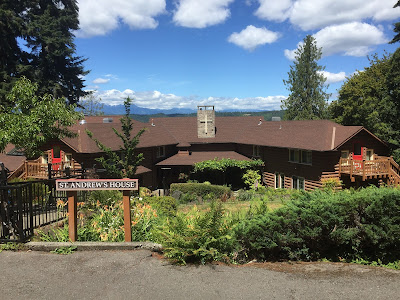 "This is the Zen approach: nothing is there to be done. There is nothing to do. One has just to be. Have a rest and be ordinary and be natural." --Osho

Turns out, I had kind of a hard time RESTING. I kept finding myself DOING. DOING some writing. DOING some Twitter. DOING some marketing for my book. Luckily I had a silent retreat planned for the upcoming weekend.

On Friday afternoon I drove to St Andrews House retreat center to participate in a 40 hour do-it-yourself silent retreat with a group of women from Seattle Unity. We had been planning the retreat for a few months and I was really looking forward to it.

I arrived a bit harried on Friday night, having hit quite a bit of traffic on the way over, just in time for dinner. I threw my things into the last available room and went right to dinner. After dinner was the ritual to begin the silence and it wasn't until this ended that I could really relax and think about what I wanted my 40 hours of silence to look like.

I have done two previous silent meditation retreats, one in 2012 and one in 2013, both at the NW Vipassana Center in Onalaska, WA and both very structured so this is kind of what I had in mind. I was going to be very strict with myself and use this time to my advantage.

I started to plan...I would make a schedule of meditating and breaks and meals and I would stick to it. I would squeeze as much meditation time as possible into this weekend and make a lot of progress on my journey to enlightenment.

As soon as I stepped out of the chapel, however, and into the great room at St Andrews, I was hit with the knowledge that this was not a place to DO; this was a place to BE. And after all, wasn't RESTING the theme of the week?

What was needed here was a total lack of structure. I am so good (some would say too good...) at creating structure for myself. I needed a way to let go of structure, to let down the carefully constructed format of my life. To breathe every moment, to BE every moment, no matter what I was doing or not doing.

And it led to a wonderfully unstructured day:

[NB This post was backdated and posted after the events described occurred due to the whole RESTING thing :)]